Excerpt from CONFESSIONS FROM THE TATTOO CHAIR,
A Collection of Tales from a Provider of One of the Worlds Oldest Artforms 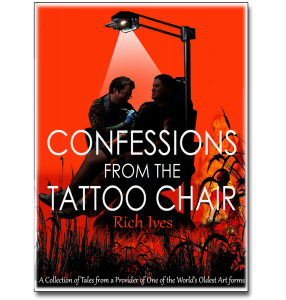 In my career, I’ve had the honor of tattooing veterans of WWII, the Korean War, the Vietnam War, Desert Storm, and Desert Shield, as well as vets who have served in places such as Panama, Somalia, and others. One client, a helicopter pilot, recently flew an American flag over Baghdad in my name. The flag and certificate he brought back to hand me will always remain one of my most cherished possessions. I’ve had vets open up in my chair conveying stories, that according to them, they would never consider telling their families. I believe the reason is I am willing to listen and give sympathy only when I sense it is needed. Many times they just need someone to agree on the sheer absurdity of the situations they’ve been in, voluntarily or otherwise. If I were to separate all the vets‘ stories into boxes I’d say the Vietnam vets would get the one marked ‘Holy shit! Are you serious?’. In 1997 I tattooed a Vietnam vet named Pinky, a small thin man with oversized glasses and shoulder-length oily straight cut hair. I could tell he could be a bit mischievous by the constant thin grin he kept on his lips as he spoke. Only half an hour had gone by during the tattoo session before the conversation became focused on his time in the war. That day he told me a story that was so strange I actually put my machine down to listen. A rare thing indeed in my daily routine of acute workaholism. He was PBR, otherwise known as a patrol boat, river, gunner’s mate who had been stuck in Saigon awaiting reassignment since losing much of his small crew. He, like many others, had made a bar at a quaint business intersection in Saigon his daytime hub. The establishment was small, dim lit and smelled of mold, stale beer, and fish products. It was known to many of Pinky’s wartime brethren as the ‘fire monk pub’. “Being buzzed by nine and drunk by noon was par for the course” he told me, “but I’ll never in my life forget one particularly morning”. On an otherwise quiet morning, he had heard gasps and spun his chair from the bar to see the other patrons staring out of the small windows. He approached a window, beer in hand, to see a sight that still burned crisply in his psyche, a robed monk, sitting in the lotus position and completely engulfed in flames. I had learned of the burning monk movement started by Thich Quang Duc, the first monk to light himself on fire in protest to the South Vietnamese occupation and had actually tattooed that image once. Since I prefer to thoroughly research the subject matter before I tattoo it, I was already familiar. Upon seeing such a surreal event through the tiny window Pinky had rushed out of the bar to get a better view. “That had to be very traumatizing” I stated. He looked into my eyes, his thin grin now straightening, and began to speak more softly. “It was a man”, he said, “but not necessarily from witnessing, or even smelling the damn spectacle, I remember a few around me my losin’ their lunch, but by the state of peace the man seemed to be in as he burned.” I found it strange that the little yellow-robed Monk not flinching or panicking once as he perished in front of onlookers was what stood out in Pinky’s mind. I’ve read it takes approximately eight minutes for all nerves to burn away and sever from the nervous system before one feels nothing. According to Pinky, the lighting of monks became such a recurring act, about every week and a half or so, that at one point an idea manifested. Pinky decided he would procure what in Vietnamese cuisine resembled a hot dog and stick it on the end of a stick. As the heat dissipated a bit from that particular morning’s burning protester, enough to approach, Pinky moved forward toward what he had begun calling a ‘Buddha-que’ and commenced the unthinkable. He roasted it! Yep, like a boy scout at a campfire, he stood over the small mass of flaming human flesh and roasted it. I could picture the scene in my mind, a young American soldier, fatigues half tucked in, beer in one hand, weenie on a stick in the other, taking full advantage of this most unusual campfire. “Bullshit!” I proclaimed, “You can’t be serious”. “Brother I swear to my dog it’s true”, he replied. Knowing how most sociopaths love and trust their pets more than any Homosapien in their circle I knew he was serious. I started to ponder what I’d just heard. “Holy shit!” I blurted, “if that had been photographed it would’ve went down as the definitive image of the frustrated American soldier in Vietnam!”. “Someone did take a picture man,” His head slid down and forward and his eyes widened as his tone became quieter again, “but the officers had the MPs destroy not just the film, but the whole damn camera. Smashed it to bits man, right on the spot. Man, that photographer was so pissed when that happened” I’m sure the journalist must have thought the same thing about what would have been the photo’s historical significance as I just had. I can imagine how embittered he might have become due to the destruction of such an important photo in its infant form. In my opinion, a tattoo artist, before anything else, is a storyteller and a story like this you just can’t make up.